It’s been 10 day since the last update. It’s been a very busy old time with the January return to work, and all the admin that seems to take place after the Christmas period. We now settle in for the run-up to Spring.

Since we last updated the story of Teddy, which was just after New Year’s Day, we’ve received the Kennel Club papers, so we can confirm that Teddy’s formal birthday is 10th October, 2018. We were relieved it wasn’t Jake’s (7th October) or the anniversary of his passing (23rd). So we now have a date to bring the other dogs around for a little celebration. We’ve also got access to the Border Collie database and it seems he has some Aussie blood in him too. I’ll keep him away from the sandpaper. His formal name is Ferrous My Little Foxy Man.

The second vet visit saw Teddy get upset en route, and again soil the back seat (ah, but we now have a plastic hammock, so it got most of it) but he turned up at the vets in a bit of a state. Therefore he was very calm during most of the session, where he had his second vaccination. He is very big for his age, certainly in the upper quartile, and weighs in at 8kg already. As you will see from the picture below, the one thing you notice is how long his legs are;

With the crate in the living room now we are getting into a regime. It’s not one we like that much, given me, in particular, is very much not a morning person. I put him to bed after an evening constitutional in the back garden at around 11am – without it there’s noise at 3am – and then he awakes, almost on the button at 6am. The putting to bed is nearly always preceded by what my wife calls the “zoomies” – Teddy gets into a zone and bounces around like Tigger, jumps off the sofas, and runs around like a lunatic. You have to catch him before you can calm him down, and give him a little time out in the crate.

I have to say earlier this week I was getting quite down about Teddy. It was when I came home from work, and all that seemed to happen was Teddy would bite or scratch me. At this time his teeth are those puppy needles, and his claws are razor sharp. My job isn’t the most stress-free and the evenings are down-time, and meant to be relaxing. However, I worked from home on Thursday and this seemed to have a calming influence. Teddy didn’t scratch or bite much at all, and was an absolute diamond. He enjoys playing on the stairs, or learning how to solve problems with balls out of his reach, and being there all day, and then not having the horrific commute (I really hate it) I’m fresher and able to spend more time with him.

Yesterday (Saturday) was the big day. The vet advised us that this was the first day we could take Teddy over to the fields. We were counting down the days this week, seeing this as a bit of a magic bullet to some of the boredom issues we think Teddy has being cooped up indoors. So we arranged to meet our neighbour, Sue, who has a Westie called Snowy, for a walk at 9:15 over to, ironically for our Little Foxy Man, to Foxes Field.

This was always the highlight of Jake’s day. The one thing we never cured with Jake was the pull on the lead. No matter what we did, Jake was a fiend on the lead going down there. This was Jake’s highlight. We were intrigued what Teddy would be like on the lead. Obviously he had no idea where he was going or what he was doing.

He walked like a champ. He socialised quite well – he jumps and lunges a bit at Snowy, who gives him a bit of a lesson back – but by the end, they were getting on, sort of OK.

I even got them to pose together. We also met a fair few other dogs and people, which is essential for his development. All throughout the nearly hour long stroll, he seemed to be very at ease, quite chilled out, and taking it all in. We won’t let him off the lead until we are in an enclosed area where there is no chance he will find a road, to see how his recall and obedience stack up. We think he’ll be ball orientated, but we aren’t totally sure. It’s certainly going to be interesting to find out.

The plan today is to take him to the fields in the car, to give him a positive memory to associate the horror of the car with. This is crucial because we want to take him further afield in quite a short period of time. We’ll do this when we can, but with me not getting home before 7pm, there’s no chance of doing that in the evening, and my wife doesn’t drive.

I took a ton of pictures yesterday, many losing focus and cutting him off because Teddy rarely stands still! I also have a new phone, and I’m not used to it yet. I seemed to have much more joy with my old one! But there are some nice ones, so enjoy (click on the tile to get the full shot): 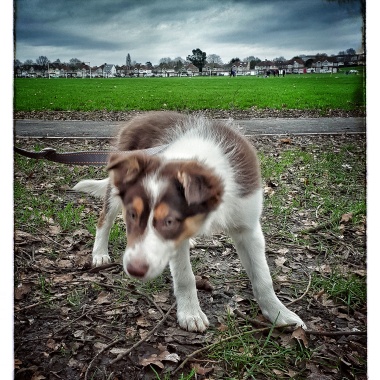 The update will probably be weekly, unless I finally get around to downloading my wife’s pictures and then I’ll add another one. We expect this week, with Teddy just passing his 3rd Month Birthday, to be one of more development, more growth, and the ability to go over the fields on a more regular basis. We’ve been blessed by dry weather, so let’s hope that continues and the walks can be daily and dry.

My wife did take this picture, very appropriate for the time of year in US sport. Given my wife’s allegiances, and the pooch’s early growth, Teddy is going to be a Giants fan. I love this picture…

Until next time, I hope you love the update, and thanks for the interest so far. His first walk photo on Facebook got a ton of hits and likes, which is really nice. It did well on Instagram too, and got my mainly cricket fan Twitter followers to like it too. Everyone loves puppies. Even when they look like this:

It’s been nice seeing how Smiler (Jagger) is doing, his brother, and where they are on the development curve. Teddy has come on a lot this week, his toilet training is going pretty well – I’d say we have a 90% success rate at the moment – but “excitement pee” when he meets someone is the new fun thing. He absolutely loves my brother, loves Sue at number 4. But that comes with a little spray. He should grow out of that.

Until next time, on The Teddy Times.